RIP to TAH: In which I spill a whole bunch of feels about my favourite bar

If you’re a fan of This Ain’t Hollywood you probably already know that the owners announced yesterday evening that the building that houses the bar has been sold and will not be maintained as a live music venue. And if you’re a fan you also probably realize what a huge blow this is for anyone and everyone who ever enjoyed a show there.

If you don’t know This Ain’t Hollywood it has been, since 2009, one of the best venues for live music in the city. Consistently winning awards for their sound, bringing in some incredible bands and artists, and just overall being a really cool spot to hang. 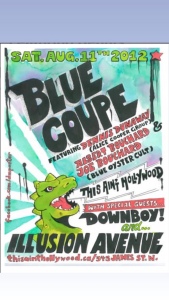 It’s located in a very old building, that has been some sort of drinking establishment or other for a long time according to their sign which reads “Serving since 1893”, an impressive record of drinks slinging, really. Charm – well, a certain type of charm, at least – it has, but not sophistication. The washrooms are not for the faint of heart and there is a very good chance that the stickers, the outdated gig posters and the thick layers of graffiti are the only things holding the stalls together. But it doesn’t matter because when you grab a pint at the bar and make your way to the front of the room to stand by the stage it is always a night to remember.

I’m super sad about this, and I don’t know if it’s because everything is extra pandemic sad right now, but losing this bar feels really personal. Maybe it’s because TAH came on the scene when we, John and I, were also getting back on the scene. By 2009 we had a couple of tweens in the house and it was just starting to get easier to get out a little more frequently, to go see more live shows, something we did nearly every weekend when we were dating and newly married. And TAH, located not too far from the neighbourhood where I grew up, became a favourite of ours. As well, having a cool rock and roll bar in that part of town is a source of pride. The place means a lot to me, honestly, and I know I’m not alone.

From the very beginning, This Ain’t was familiar and it was all Hamilton. Walking in felt like visiting a friend’s house and descending to their rec room, all dark wood, kitschy posters and board games, a faint smell of weed, as if their older brother and friends had just vacated, leaving us their cool records to play as long as we were extra careful.

There are too many shows to count, but some standouts off the top of my head include Diamond Rings, a show that happened during a pretty severe snowstorm, but a show that most definitely did go on. There was the incredible Carole Pope whose immense presence and voice filled the entire room of awestruck fans, and there was also powerhouse band Monster Truck, before they went on to sell out giant arenas all over Europe. We saw The Sadies, Shonen Knife, Teenage Head…and that’s not even including the bands that Charles has been in. Illusion Avenue. The Retroaction. Delta Days. Billy Moon. 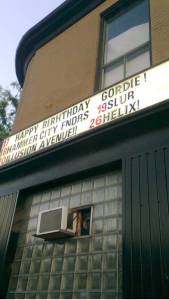 Illusion Avenue, the first band Charles was ever part of got a headstart there because Lou, one of the owners of TAH, loved them. They were four 12-15-year-old kids and they had an old school rock and roll kind of sound and Lou and his regulars couldn’t get enough of them. These kids opened for bands like Monster Truck, and Blue Coupe, members of Blue Oyster Cult; they even headlined their own CD release show at TAH. I spent a couple of late nights there while they recorded live from the stage because the sound guy wanted to do them a favour when they didn’t have a place (or money) to record demos. On one of those nights, at midnight on a school night, I ordered pizza to the bar and we fed the boys and the grateful staff who toasted us and topped up our pints.

TAH is also part gallery with its rotating displays of local art, and part community centre, so many times raising money and support for local charitable organizations. It became the official Supercrawl after-party location, with queues to get in stretching for blocks, and there would be open mic nights, jam sessions, all-ages gigs for high school kids, and so much more. It is truly, truly the bar that is up for anything and everything.

The building has been sold but it’s not over ’til it’s over, and that doesn’t happen until August. Some shows are promised before the last last call, but with the pandemic forcing things to be so up in the air, it’s hard to know what that will look like. But I do really hope we get a few more nights to remember before the place as we know it now is gone forever. I still want another few pints, another few bathroom selfies, another few encores, and another few tipsy stumblings home at the end of another, final, memorable night of live music.

“Always catch the last set to play as the night gets old
Oh babe, It may be quite good
But it’s not quite as good as It should
Oh babe, It ain’t Hollywood”

Pour one out, pals.

This entry was posted in #HamOnt. Bookmark the permalink.